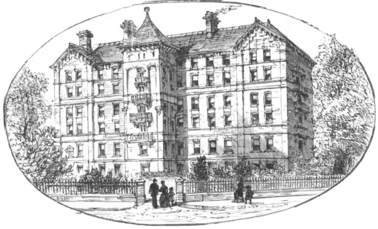 The script specifically states that there is to be no use of prosthesis or elaborate makeup to be used on the actor portraying Joesph Merrick.  However there is a moment in the show where the actor observes a photo of the real Merrick and then contorts his body to mimmic his posture.  Finding a high quality image which would not distort on enlargement that was period accurate prove difficult.  After extensive searching I was able to find a high quality scan of a 1800's copy of The British Medical Journal with an article on the subject which had the image that we would eventually use. 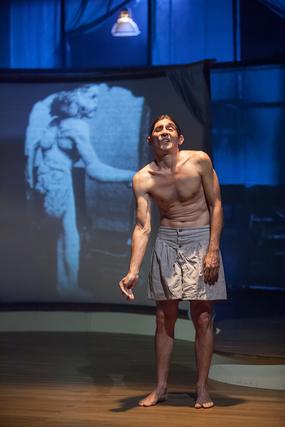 This Tony Award winning play tells the true life tale of Joseph Merrick, whose severe physical deformities landed him in a Victorian freak-show. Joseph is rescued by Frederick Treves, a young doctor who discovers that behind the disfigured visage, lies not an animal, but an intelligent mind and a sensitive soul. As their friendship develops, Frederick endeavors to show the world to Joseph, who discovers it is both more beautiful and more cruel than he could have imagined.

With the sound design, I wanted to compliment the strong emphasis on maintaining a period feel to the show.  This lead me to do heavy research into Victorian Parlor, period orchestral, and Roma music of the time.  Much of the sound design found itself located in the scene transition and to establish locations--such as Liverpool ST Station.

The idea behind the sound that introduces us to Joseph Merrick at the side show on grimy street in London was to give it a grim carnival note.  This sequence was heavily inspired from Romanian and carnival music of the period.

Research for the projections:

Every scene in the script had a whimsical and meaningful unspoken title for every scene and we as the production team wanted to bring those into the show.  The way we did this was to incorporate scene titles on the stage as part of the transition.  But in an effort to maintain the period motif that we were working towards I did painstaking research on which font to use.  Specifically, I looked at newsprint title blocks, advertisings, and signage. 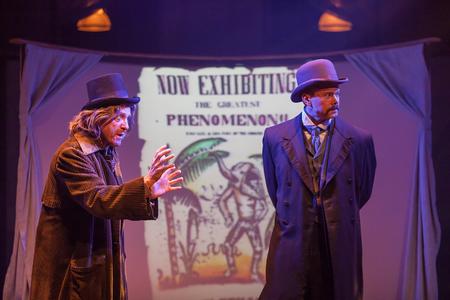 We ended up deciding upon The Victorian Parlor font as it closest approximated the period styling and research.  The above right photo is the scene titles master sheet from the show (click to expand).

As the show physically in space took place in a surgery gallery we needed a way to help the audience understand the location shifts that happened throughout the show.  This was accomplished by using historical illustrated location images (year accurate) along with sound and the scene titles.  See The London Hospital below.  Other locations included Whitechapel RD and Liverpool ST Station...

If you want to see more of my work, browse my Portfolio. 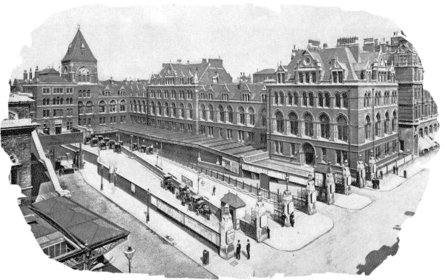 These examples of period uses of typefaces and fonts demonstrate a variety of formal scripts,
characterized by characters having strokes that join themselves to other letters.

Some of the other examples such as the newspaper on the previous slide and the sign demonstrate a Neoclassical or Didone Serif.
These are evidence by a contrast between thick and thin strokes that are abrupt and dramatic.  The axis of curved strokes is vertical with little or no bracketing.  In many cases, the strokes simulated by the font are round shapes rather than a broad pen script effect.

With the previous information in mind I explored a few examples of what the scene titling could look like:

This is an example of a scene transition that brings us into Liverpool ST Station.  It is a fast-paced entrance with several sonic clues to period and location.